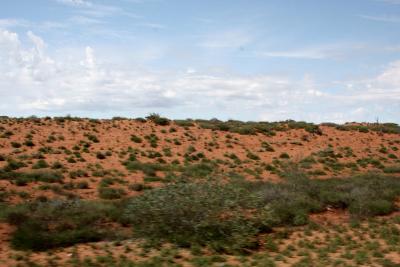 I’ve seen pictures of the planet Mars, and this part of Australia sure looks like Mars. The landscape here is relentlessly red. The red is a deeper red than the red center. The desert is red, hills are red, sand dunes are red. Even the rivers look deep red, much deeper red than the Red River on the Texas-Oklahoma border. Our whole journey from Nanutarra Roadhouse to Exmouth had only minor elevation changes and only a few curves to move us around rather than over hills.

Temperatures are moderating as we travel south. With a few clouds around mid-day we were able to shut down the air conditioner periodically as we traveled. Traffic was light until we reached the turnoff for Exmouth. Making that turn, we began traveling west and then north onto the Exmouth Peninsula.

The town of Exmouth lies at the northern end of the peninsula. There is a navy base north of town. We learned that the navy base used to be a US base in the 60’s and 70’s. A large antenna array north of the base is used for VLF communications with ships and submarines. The antenna is still operated by the US but the base has been turned over to the Australian Government. The antenna array is similar to another we saw in central Australia. Twelve radio towers are arranged in a circle around a single larger tower. All the towers are connected and connecting cables support an antenna ring around the central tower. The town of Exmouth didn’t exist until the US built the naval base and the antenna. Exmouth was built like a US town until Australians moved in to support the base population with goods and services.

Around Exmouth there are numerous national parks and reef areas. One of our goals here is to do some snorkeling. We didn’t get a chance to see the Great Barrier Reef and want to see some of the Ningaloo reef while in this area. There are numerous companies here that provide snorkeling tours, many feature a swim with a whaleshark. Whalesharks are large sharks, not whales. They are filter feeders like whales, thus the name. They have only small teeth at the back of the mouth. They feed on plankton in the water. The whaleshark has a large wide mouth with which it sweeps up small plants and animals for its food. The dive up to 2000 meters below the surface and feed at the surface. Being a fish, not a whale, they do not need to come to the surface to breathe. While they are at the surface snorkelers can swim near them without disturbing them. A whole industry has developed in Exmouth to support this activity.