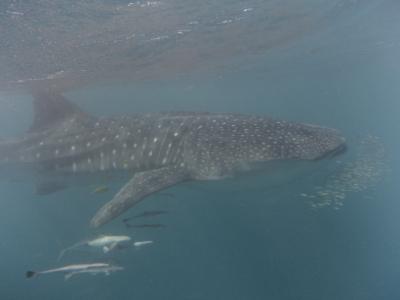 Monday, May 12, we went out to swim with the whalesharks. We chose Ningaloo Whaleshark Swim as the company based on the information we could gather. We were picked up at our park at 7:15 and driven to the dock which is on the other side of the peninsula. There were 19 adults in the group plus three young children. We were transferred to the boat which was anchored offshore and then taken to a reef area. The snorkeling was partly a training exercise for the whaleshark swim which has to be executed very quickly to catch the shark as it swims by. You can swim for a while but eventually it will outpace even the strongest swimmers.

The boat anchored off the reef and we were to swim to the reef for snorkeling. With the tide coming in and the boat being inside the reef it meant we had to swim against a pretty strong current. I wore myself out completely swimming against the current and just couldn’t get ahead of it. So I returned to the boat, a washout! Louise is a stronger swimmer than I and was able to get to the reef and snorkel there. Everyone came back with stories of a Manta Ray and other great sightings of fish. Once everyone was back on board we set out to hunt a whaleshark.

The actual hunting is done by airplane. Pilots spot them swimming just below the water’s surface and relay their location to the ship. So off we went bouncing our way into the 2 to 3 meter swells of the Indian Ocean. As our guide said it could be rough as there is nothing between where we were and Africa just a whole lot of open water! Reaching a whaleshark we put on our snorkeling gear and once the boat was positioned ahead of the shark we jumped in. Off we swam to see the whaleshark. I got a look at it but it was a fleeting look still I had seen it. Whale sharks are large, this one was about 4 meters long from head to tip of tail.

Returning to the boat, we continued searching for whalesharks. More rough seas plus the seawater swallowed while snorkeling began to hit a few of the adults. One woman was down and out from that point on. A second whaleshark was spotted and we got another chance to snorkel. This time I got an even shorter peek at it before it swam away. I couldn’t keep up with it at all. Louise got a pretty good look.

We encountered a group of dolphins and circled them several times. There were about 20 dolphins in the group. They were not shy and stayed close to the boat. I went to the top deck and took some pictures. The telephoto lens doesn’t work for dolphins because they pop up and then are gone before you can point the lens at them. You have to aim a wider view lens at the area where they are and even then when you see them the lag time between realizing they are there and pressing the shutter relase can mean you get a nice picture of the ocean surface. I got a few good shots of dolpins before we left them.

Shortly after that we found a third whaleshark. This one was swimming slowly and I was able to swim along with it for what seemed like a good length of time. I would guess that I was within 5 feet of the shark for a good 30 seconds, maybe more. I had time to look at the gill slits, to examine the fins and tail and to also appreciate the host of smaller fish that accompany this huge shark. There are different fish at what seem to be special locations. I had seen two long eel-like fish just below the belly of the shark with the first shark. There was also a school of about 20 tiny fish that were five or six feet below the belly of the whale. Several medium sized fish swam just above the shark and one colorful reef fish was swimming just in front of the tail. So the whaleshark has a whole community of fish that swim along with it. During this whole time I was the only swimmer along that side of the shark. Then the group caught up with me and I dropped out. It was the best experience of the day for me. Louise also got a look at this one but was on the other side with the crowd most of the time so she didn’t get as good a look. The photo with this article is one from the set the photographer for Ningaloo Whaleshark Swim took on the day we were swimming. They gave us a set of pictures taken during our swim.

Finally a really large whaleshark was spotted. Our guides estimated it at 8 meters long. Louise was too tired and was feeling the effects of the motion of the boat and the saltwater she had swallowed while snorkeling so she sat out this one. I went in after it but never saw it. Louise told me I was right in front of it but must have somehow missed it. Anyway, I’d had a good experience and learned something about my limitations. I’m going to have to get more swimming exercise to get those muscles toned up for our coming cruise in Fiji.

On our way back to the dock, we were traveling with the swell and it made the ride much easier. Everyone seemed to recover from their seasickness enough to eat lunch. We stopped just short of the dock to do one final reef snorkel and then returned to the dock and back to the campground. We spent the next day taking care of laundry and resting in the campground before departing Exmouth on Wednesday.