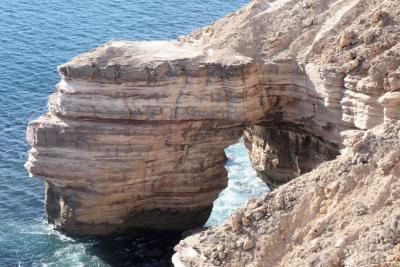 We left the Billabong Homestead early Saturday morning and drove on south toward Kilberri National Park. This would be a side trip off the North West Coastal Highway that we’ve been traveling. The road through the park takes us to Kalbarri, a small town on the coast. The National Park surrounds the park. The central feature of Kalbarri National Park is the Murchison River. Like many of the rivers in Western Australia (WA) the Murchison River is barely flowing or dry for much of the year. It drains a large area of Western Australia so when they get rain, it flows vigorously. We saw evidence that the water level is easily 20 to 25 feet above the minimal flow we were looking at. During this flow large rocks get rolled along by the river and it cuts the cliff base of sandstone rock. Once the rock is undercut, the cliff above becomes unstable and falls into the river channel. We saw some really interesting sandstone, red of course, in our walk to the river channel.

We visited several overlooks and walked down to the river in one location. Like many other national parks in Australia there are many four wheel drive roads which are unsuitable for our campervan. The area is called a gorge and indeed it has the look of a gorge but this is flat land and the criteria for a gorge is different than our idea of a gorge. This isn’t the Grand Canyon or the Black Canyon of the Gunnison. The Kalberri Gorge is a shallow gorge, perhaps 100 feet deep, maybe a little more. A ten or fifteen minute walk gets you from the rim to the bottom of the gorge. Still, it provides excellent relief from the routine flat sandy plains that surround it. The red sandstone make for a beautiful rock exposure and I’m sure the river is a spectacle when it is flowing.

The other feature of Kalbarri National Park is the seacoast south of the town of Kalbarri. We drove this area on Sunday, making stops at each overlook and hiking some trails. It is a beautiful coastline and we spent the entire day driving about 20 kilometers from Kalbarri visiting these sites. Again, there is the red sandstone but it is capped with some white and yellow sandstone in a few places. These are deposits that were laid down along a seacoast millions of years after the red sandstone was deposited. We saw a sea stack and a sea arch in one location. We also saw a Humpback Whale splashing in the distance at that location. A few dolphins were also swimming in the area.

Finishing our exploration of Kilbari National Park at 4:30 in the afternoon we headed south to Geraldton. We have now abandoned the North West Coastal Highway and will take the Indian Ocean Drive to the south all the way into Perth. Sunset here is coming about 5:45 p.m. and we had 150 kilometers to go so we were going to be arriving after dark. Louise called ahead to a park where we wanted to stay. They closed their office at 5:00 so it was a good thing we called ahead to let them know we would be arriving late. Everything was done over the phone and we were told to pick up our packet of information in a lockbox at the office.

We parked for the night at the Sunset Beach Holiday Park in Geraldton. Showers, dinner and then a little time on the internet completed our evening. This park is one of the few we have found lately that has internet service through a company that we committed to early in the trip. They have a network of parks that use their service and we made good use of it on the east coast but we have only found it in a few spots in the outback. We’ve been able to get our money’s worth from the company but just barely. When we are able to find them, it is nice to have unlimited time and a usage limit which is ample for our needs.