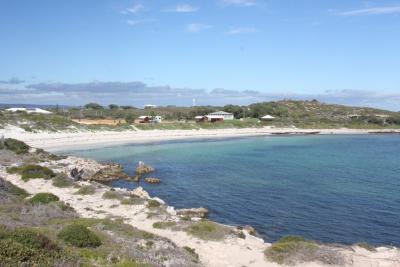 Departing the Geraldton area we noticed a dramatic change from our travels over the last month. We have returned from the Great Australian Outback. Suddenly we were seeing fields of crops and farms. There were still many areas with native plants growing but the sudden change from no farmland to abundant farmland was quite surprising. Along with this, we no longer saw signs for domestic animals, cows and sheep, roaming on the road. This was the end to open range country. Traffic was light on Indian Ocean Drive. We didn’t meet a single road train in our drive to Ledge Point.

As we drove the road, we stopped in several small towns to see the ocean views and walk along beachfront trails. The highway itself wanders among large sand dunes. Many are covered with heavy vegetation but there are also huge sand dunes with no vegetative cover at all. The sand here is surprisingly white. This would indicate that the sand particles are almost exclusively quartz.

Several towns bear mention for their facilities along the beach. At Green Head we pulled into a park at the beach. A map directed us to a walkway up and over a dune and then to a scenic overlook on several bays and some offshore islands. We enjoyed the cool sea breeze as well as the sound and sights of waves breaking on rocks and the beach. The park, walkway and overlook were well maintained and had interpretative signs to explain what we were seeing on the walk.

At Jurien we enjoyed walking out onto their pier and seeing schools of small fish in the water below the pier. There was a very nice playground set up on the sand at the upper end of the beach next to the pier. There was a walkway along the beach and we walked that for a while. Along the walk there was a set of exercise equipment for adults. A little further down the path there was an exhibit about an artificial reef which had been constructed just off-shore in the area. The artificial reef was designed for young people and other who were not capable of swimming out to the natural reef which was quite a distance from the shore. They had constructed reef balls made of concrete, these hollow balls ranged in size from 1 meter (three feet) in diameter down to 30 centimeters (one foot). They weighed as much as 750 kilograms (1500 pounds). These had been placed in water that was about 10 feet deep to create a reef environment for fish and plants. The project was driven by a group of volunteers and partially funded by the county government. Many donors contributed to the project. It was truly a community effort.

Once again we pulled into our campground as the sun set. The office had just closed but we were welcomed and told where to pick a site, we could register in the morning. The camp at Ledge Point was one of the nicest parks we have stayed at. It had some long stay occupants but showed all signs of a new park. The facilities were all clean and well maintained.