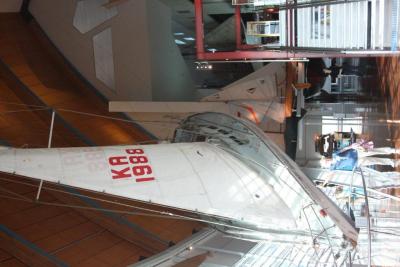 We left Ledge Point after a drive through town to get a look at the community. The housing was upscale beach housing with beautiful homes with a second story that looked over the dunes to the sea. The dunes all along this coast are very well preserved. Walkways are provided at specific places and people seem to stay off the dunes other than through the walkways. This is nice to see and seldom seen in the US. Dune erosion can be quite serious. Once the plants have been disturbed, the dune is free to move. Regular ocean breezes will move particles up one side of the dune and they tumble down the other side. Once sand grain at a time (actually many at a time) the dune moves further inland. If there is no plant life to anchor the dune, it will move into a street or road, a lawn or a field. Once the plant life is gone, it is virtually impossible to stop the movement of a dune. At the upper end of South Padre Island near where we live in the southern tip of Texas, the dunes have reclaimed the highway north of the town. You can drive north of town until the roadway disappears under the dunes.

We had reviewed the brochure for Perth and the main thing we wanted to see was the Fremantle area which included some of the early buildings in the downtown. The focus of the area seemed to be the prison so we put that address into the GPS. One more time, we can’t say how valuable the GPS has been on this trip. It routed us on high speed motorways right to downtown and then we were off within a couple of blocks of the prison. The city of Fremantle has a Park and Pay lot at the prison. You pay your fee at a station, get a receipt and put that on the dash. The camper wouldn’t fit in any of the parking spaces but they were end to end double spaces so I parked in an empty pair at the far end of the lot and used part of the space in front of us. The lot was never full while we weren’t blocking a spot that could have been sold.

The prison was the state prison for Western Australia. It was built in the 1860’s and that says a lot about the nature of the prison. It was added to and expanded several times. By the 1960’s there were severe crowding problems and the conditions in the prison must have been quite frightful. There were several prison riots, one in the 1960’s over the quality of the food and another in the 1980’s related to the overcrowding. The prison was finally closed in 1991. There were a number of tours available but the general information was dreadful enough we didn’t want to spend the rest of the afternoon in the prison. We left there with a bus route and schedule for the free shuttle around Freemantle. Using the map we headed for the Maritime Museum on the docks. A short walk to the bus stop and a short bus ride and we arrived about 2:00 in the afternoon.

Outside the Maritime Museum an extensive set of low walls listed all the people lost at sea in a long list of shipwrecks. Everywhere we go on the coastline of Australia there are extensive lists of shipwrecks. The coastline has it hazards as all coastlines do and many of the wrecks occurred before accurate navigation techniques were common. Even in recent times, shipwrecks occurred in some cases because navigational hazards weren’t well plotted. The museum itself had a number of interesting displays including one documenting a 1980’s series of circumnavigations of the globe by Jon Sanders. His boat and equipment he carried were displayed. The boat was displayed at a steep angle and a marker near the ceiling behind the boat showed the height of a 30 foot wave that overtook the boat on one of his trips. Jon saw it approaching and hung onto the mast as the wave washed over the boat.

There was an extensive exhibit with models of the America’s Cup yachts from the beginning of the competition to present day. They were displayed in sets for each year and it was really nice to be able to look at the progression of changes in the design over time. One of the yachts, the Australia II which was sailed by the Perth Yacht Club, was on display, full size. An early ferry and fishing vessels from small to large were also there to be seen. We spent several hours and if we had been there earlier in the day we would have spent a few more.

Leaving the museum, we caught a bus to the prison. It went out of service while we were on the way so we switched to the other free bus route and took a bus to the nearest stop to the prison parking lot. We walked back to the parking lot by a different route which gave us a chance to view a large athletic field called The Oval. We were able to peek through the fencing along one side and see the stadium. We arrived back at the parking lot with a few minutes remaining on our parking pass.

Putting the address for the Central Caravan Park into the GPS put us on the way out of town to a location near the airport. The route started a bit slow with stoplights but they were well timed and we didn’t have to stop at many. Soon the lights gave out and we were on the Great Eastern Highway headed out of town. It was a much faster trip than I anticipated in early rush hour traffic. Our park is near the Britz office and the airport because we will turn in the camper in two days. We’ll spend the next two days getting everything ready for the next leg of our journey, an air flight to Sydney.