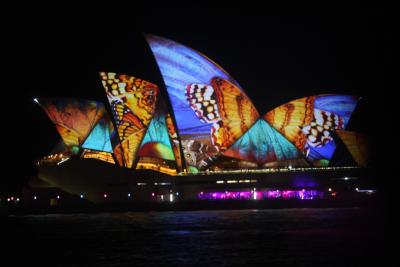 With this entry, we are clearly outside the realm of motor home experience but the remainder of our trip started with almost three months in the motor home so I'll finish off the last three weeks just to give the story an ending. We've flown to Sydney after turning in the campervan at Britz in Perth.

When we checked into our hotel they gave us some information about a festival starting in Sydney on Friday night, the night we arrived. It is a two-week festival of lights, sound and ideas. There are 60 exhibits set up around town with various kinds of visual activities. Some are large like the projection of lights on the Sydney Opera House and others are small like an exhibit with a camera that you looked into and it put your face on a wall. Your face was altered and blended into a colored spot. The exhibit was called Graffiti Me. There were simple things like a light tunnel to walk through. Others exhibits were very complicated. An exhibit downtown near Circular Key projected a cartoon image with clouds, lightening, rain and a light bulb cartoon character walking across the walls of several skyscrapers. The ferries in the harbor were lit in coordinated constantly changing colors that matched the color on the ferry terminal. Other boats were lit in a variety of colors.

We went down town to the famous Sydney Opera House to tour the building. Louise would have liked to see an opera there but the season doesn’t start until July. When we arrived to tour the building there was a huge crowd with more arriving every minute. This was the opening night of Vivid Sydney! Our tour of the Opera House lasted until sunset. Before the tour was over the building was the palate for ever changing patterns and colors. Once outside we enjoyed watching many of the exhibits. As we walked back to our hotel I took pictures of some of the exhibits and the city at night. Crowds were huge throughout the city with throngs of people walking everywhere.

We stopped for dinner at Gallagher’s Irish Bar and continued our walk back to the hotel. Part of the way we walked through Hyde Park, a very nice park with lighted fountains and wide well lit walkways. At one point another person stopped to photograph something. I looked and they were taking pictures of a possum. These are much different than the Opossums we have in the US. They look more like a squirrel. We saw a second, a female with a young one on its back. By the time we arrived home it was late and we had pictures to process and needed some down time to relax before turning in for the night.