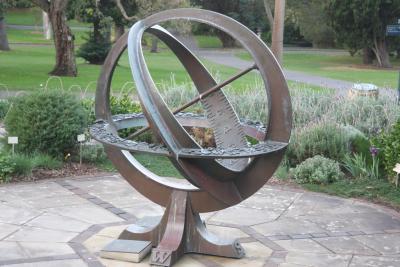 Our second day in Sydney we took a bus tour through the city. The bus was a double decker with an open upper deck so that is where we sat. I took photos as we drove along. We had earphones with commentary on the areas of the city as we rode along. The weather was perfect, sunny and warm. At stops I had a chance to stand up and get better pictures. My philosophy on taking pictures when moving is that you shoot lots of pictures knowing some will be blurred or will not be well framed. If I take enough pictures there is a better chance that one will be satisfactory. Often the rate of travel gives just a single moment when a good photograph is possible in which I am quick on the shutter button, timing is key, hesitate and the shot is gone.

Our tour took us downtown and to the waterfront. The waterfront in Sydney is like a glove. The tour visited one bay after another. I photographed a mixture of new modern buildings and skyscrapers along with heritage buildings over 100 years old. Each is interesting it its own way. Some old buildings are well maintained and look quite beautiful while others have been neglected and will someday soon become unusable. Sydney presents a nice mixture of old and new. We are enjoying the difference in architecture between buildings of different ages but also different from the architecture we knew from the US. There are a wide variety of cultural heritages which influence buildings here in Sydney.

We rode most of the route before getting off near the Royal Botanical Garden. We spent the rest of the afternoon walking around the Botanical Garden before starting our walk home. The botanical garden is free and has wonderful old and very large trees. There is a fernery with an amazing variety of ferns. Louise said she expected to see a dinosaur stick its head out from behind one. There were tree ferns, giant ferns and a whole group of ferns that didn’t look like ferns at all.

We found an herb garden which was very aromatic. Every step brought a new scent. Then we spotted an armillary sphere, a special form of sundial. This one was a recent addition to the garden. It commemorated the work of a volunteer who worked at the garden for many years. Around the horizon circle were sculptures of herbs with their names. With a diameter of 2 meters, there were quite a few herbs illustrated on the horizon circle.

We left the garden about 4:30 in the afternoon. We waited at the bus stop for the next bus that would take us back toward our hotel. It took about 15 minutes for the bus to arrive. We rode for several kilometers getting off at the north end of Hyde Park where we had seen a restaurant/bar we wanted to try. The bar, the Three Wise Monkeys had a large statue of three monkeys in the classical hear no evil, see no evil, speak no evil pose. We thought it would be worth a try just for the fun of it. We found seats at the windows which are open and right on the sidewalk looking out on a major street. Our table was the window sill and people are walking by on the sidewalk outside the window, just a few feet away. So we had a wonderful seat for people watching. Sydney is a very busy city. The sidewalks are filled with people all day long and far into the evening. It was a fine night of people watching.