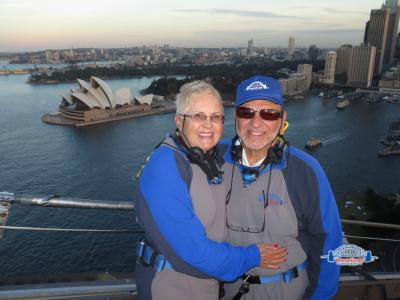 Our third day in Sydney, Monday, May 26, is a big day. We start out with a second ride on the tour bus. We purchased a two-day ticket. There are two routes for the scenic drives, this one takes us south of the city to Bondi Beach and then back to the city. We remained in the urban area the whole trip but are away from the large buildings of city center. This trip was interesting as we traveled through many older parts of the city. Bondi Beach itself is a gorgeous wide beach with a nice surf. Across the road from the beach is a whole community built up around the beach. It is similar to many of the popular beaches in southern California.

When we returned to town we got off the bus at The Australian Museum. From there we walked down toward the Sydney Harbor Bridge. We stopped to get ice cream at a little shop near the bridge. Then we were on to Bridge Climb Sydney. We had reserved a sunset climb to the top of the Sydney Harbor Bridge. We would start our adventure at 3:05 in the afternoon and finish about 7:00 in the evening.

Once we checked in, we were met by an employee who escorted us in and took us through signing the liability release form. Then we were given our bridge climb coveralls. We changed clothes, leaving behind all metal and all personal objects except eyeglasses and stud earrings. Then we passed through a magnetometer to ensure we had no metal objects in our possession.

With the security check complete we met our guide, Nick, who would take us to the top of the bridge. Now we were outfitted with a safety belt with an interface to hook us into the safety cable that guided us along our walk. We received a radio receiver and headset so we could hear our guide. We also got a pack with a fleece sweater to wear if we needed an additional layer of clothes to keep warm. We were given a headband flashlight and finally a handkerchief and a hat. All of these things were hooked onto our coverall suit so that nothing was able to fall onto the bridge below us.

The final preparation was to practice going up a ladder and down a ladder. Once all this was done we slid our safety harness line onto a safety cable and were out the door and onto the bridge. We exited the door and were already about 20 feet above the ground. Initially we walked on a catwalk well out onto the bridge. Then we began to climb, three step ladder-like sets of steps took us up another 20 meters or 60 feet. Emerging onto the top of the upper girders on the bridge, we were now on top of the bridge. Railings on either side of the three foot wide walkway give us an added sense of security. Looking around we can see onto the top of the roof of some of the tall buildings in the city!

From here there we walk on top of the bridge girders. There are step platforms on the surface so we were are walking similar to the way you would walk up a widely spaced set of steps. The incline is steep at first then begins to level out near the top of the bridge. Along the way we stop and have pictures taken by our guide. At the top, 436 feet above the bay below, we all give a cheer. Everyone in our group makes it to the top without any problem. Our guide, Nick, has kept up a constant patter of information about the bridge, Sydney, Australia, and much more. His commentary gives us something else to think about than the height above the waters of the bay below.

As we reach the top, the sun is setting in the west. Sunset colors in the sky reflect off the waters of the bay. Sidney bay is a labyrinth of water, islands and peninsulas. Standing atop the bridge we are able to see the patchwork of water highlighted by the skylight reflections. How I wish I had my camera. I would have taken hundreds of pictures! Soon it is time to begin our descent. We stop for one last round of pictures with the lighted city in the background. As we are about to leave the bridge Vivid Sydney lights up the Sydney Opera House and we can see it from the bridge. Then it is back down to Earth. We reverse the dressing procedure removing all our equipment and are out to the gift shop. We get our certificates with a picture of our group as part of the deal. We also purchase the set of pictures taken of us as we climbed the bridge.

With that challenge behind us, we found a restaurant, the Waterfront Restaurant. We were able to get reservations for 8:30 which was an hour and a half from the time of the reservations. I was prepared. I had my tripod with me so I could photograph some of the Vivid light displays. I visited a number of the displays in the area and also spent time photographing the Opera House.

Time arrived and we got a table right by the wall that separated the dining area from the dock area with the displays. We enjoyed our first real restaurant meal in Sydney spending an amazing amount of money for a simple meal, a bottle of wine and desert. We had wonderful service and enjoyed the evening.

On the way home I continued photographing lighting displays including the Museum of Art which had the whole building covered with a constantly changing design. There were other buildings with displays, one had a forest that bloomed, leaves came out then the colors changed and the leaves fell off and finally took you back to the bare trees again. We talked with one exhibitor who told about how their group had developed their display. We had a nice conversation and picked up a suggestion for the next day.