The Junior Play when I was in high school was Harvey.  My best friend played the lead role, Elwood P. Dowd.  Elwood, a grown man, had an imaginary friend, Harvey.  Harvey was a rabbit, a six foot tall rabbit, according to Elwood.  I had a minor part, acting was never my thing.  Anyway, these days there is another Harvey and it isn't a rabbit.  Harvey is dumping a huge quantity of rain on the upper Gulf Coast of Texas and now Louisiana.  A stalled storm can unload a huge amount of water on any given spot.  Think of it as a conveyor belt, picking up water from the warm water in the Gulf of Mexico and carrying it to the coast of Texas where it deposits it, continuously, in huge quantities.

Several years ago we had a single thunderstorm that sat right on top of our RV Park in Texas, Sandpipers Resort.  I can say that the thunderstorm sat there for one hour because I looked at the radar record as and after the storm was over.  In one hour this thunderstorm dropped 5+ inches of rain on our park.  The low spot in the park became a lake, we dubbed it Lake Sandpiper.  Our mobile home was on the northern edge of Lake Sandpiper.  Fortunately for us, 5 inches wasn't enough to do any damage but a few other homes sustained some minor damage.  Lake Sandpiper, having no drainage outlet other than a 2" pump, persisted for a week.  That was but a single thunderstorm.

I used to live in a rural area in Missouri.  We had a thunderstorm that dropped 11 inches of rain in one hour.  It was an amazing to watch the water come down in such a torrent.  Immediately, the local river became a rolling current, filling it's banks and then spilling over into adjacent agricultural fields.  Tiny creeks became impassible, low areas flooded and became stagnant for weeks.  Crops died from excess water, people were delayed on their way home but no one died and the area recovered almost without any concern or help being necessary.

Harvey is a different matter.  Harvey is a succession of such storms.  And the storms aren't falling on an agricultural area, not even a hilly area, Houston and many of the other towns along the Gulf Coast are on the coastal plain, a wide flat area along the coast of Texas that extends from Louisiana all the way to Mexico.  Drainage is slow in flat areas particularly when they are only a few feet above sea level.  Add to that the fact that much of the Houston area is covered with pavement which doesn't absorb water but sheds it into nearby ditches.  Pavement isn't the only impermeable area, homes themselves have roofs which are by design impermeable.  Who would buy a leaky roof?  So lawns and parks are the primary areas that absorb water when it rains.  Urban areas are particularly prone to flooding.  I can recall a visit to Houston many years ago, on our way from Fort Sam Houston in San Antonio to Fort Bragg, NC.  We were visiting some relatives that lived there.  During our visit a short thunderstorm passed over the area.  Upon leaving, we saw significant street flooding.  Nothing that prevented our travel but we drove through six inches of water in places.

So Houston and it's surroundings are prone to flooding and Harvey is the perfect storm for the area.  I'm not ignoring other towns, many towns further south along the shore took the brunt of the winds of Harvey.  There have been many clips on the news showing the destroyed buildings.  Some towns are nearly completely leveled.  Fortunately the death toll in those towns is amazing low.  Within Houston, the disaster is multiplied by millions of lives.  A city has problems that no other area has.  The density of population multiplies the inconvenience, loss of life, financial loss by millions.  Ability to move the population, evacuate the area, is highly limited by the sheer numbers that are involved.  The after-effects of this storm are going to be sobering.  Katrina and now Harvey have inflicted huge losses and pain on populations in large cities.

Anyone involved in disaster planning for large population areas should be alarmed and should be working to re-evaluate their disaster plans.  Metropolitan planning needs to account for population density and evacuation routes and plans need to be studied and improved.  We can do better if we will learn from the past and present.

Our home in Edinburg, Texas was spared.  Harvey hit land far enough north that people staying in our park sent messages via Facebook and other communication letting us know through pictures of sunrises and sunsets and words advising us of no wind, no rain, that all was well in Sandpipers.  In fact, announcements about RV Parks recently have focused on a very few that are taking storm refugees.  I can't imagine a park that wouldn't take refugees from Harvey if space were available.  In the RGV there are about 80 parks that will accommodate thousands of RV's during the winter.  Those parks are largely empty right now and could provide a place for RV refugees to stay.  If you are looking for a place to go with your RV to get out of the way of the clean-up, call any of the parks in the RGV.  With luck you may even get a site that might last through the winter.  There is no doubt that complete recovery will take years.

Tonight I sit in a safe and secure place but I can imagine the intense concern and dread of those in the Houston area.  It's called empathy, a normal human emotion.  Don't fight it, consider your life and what you would feel if you lived in the Houston or central coastal area of Texas or Louisiana tonight.  Our thoughts are with those in the grip of the storm tonight and into the future. 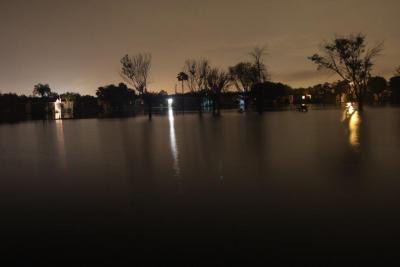